Bullying and Racism in the Workplace

South Africa, as a developing country, currently faces enormous economic and political challenges leading to spiralling labour cost and the need to improve productivity in the workplace. Within a typical performance-driven culture, with an uneven distribution of workplace power, management teams are often accused of the exploitation of especially lower-level employees. South Africa’s diverse background and history of racial segregation and discrimination further complicates labour relations in the workplace.

Employers have the common law duty to provide a safe and healthy workplace. Bullying, being a psychosocial hazard, is prevalent in our workplaces as shown by the SA Board for People Practices’ (SABPP) Fact Sheet (March 2018). Smit (2014) proposed the following definition for Bullying in the Workplace in his PhD Dissertation (Bullying in the Workplace: Toward a Uniform Approach in SA Labour Law):

“Conduct of an employee directed at another employee, which a reasonable person would find hostile or offensive and is unrelated to an employer’s legitimate business interest. Abusive conduct may include but is not limited to repeated infliction of verbal abuse, such as the use of derogatory remarks, insults, epithets, verbal or physical conduct that a reasonable person would find threatening, intimidating, humiliating or creates a risk to health and safety or relates to the gradual sabotage or undermining of a person’s work performance.”

According to Deidre Viljoen from ENSafrica (2013), workplace bullying occurs without apparent provocation, when individuals are regularly abused or intimidated by another co-worker/s over a period of time, hampering performance and making work life difficult.

Destructive communication to demean and humiliate may include:

Bullying has dire impacts on employees. Physical impacts are varied and may include, for example, sleep and eating disorders, skin rashes, asthma and allergies, weight changes, headaches and digestion irritations; and high blood pressure. Psychological effects are also varied, but centre around anxiety, depression and lowered self-esteem. Bullying often also impacts on an employee’s career, e.g. a heightened intention to leave the current employer – thereby disrupting career progression. Other workplace consequences include distrust and conflict in work teams leading to poor productivity, poor levels of communication, loss of respect for supervisors, poor company reputation and possible legal costs should complaints be laid.

Bullying can be used as an umbrella term (see Table 1) in the South African context for any unfair discrimination (direct or indirect) and harassment (sexual, verbal, physical, etc.). 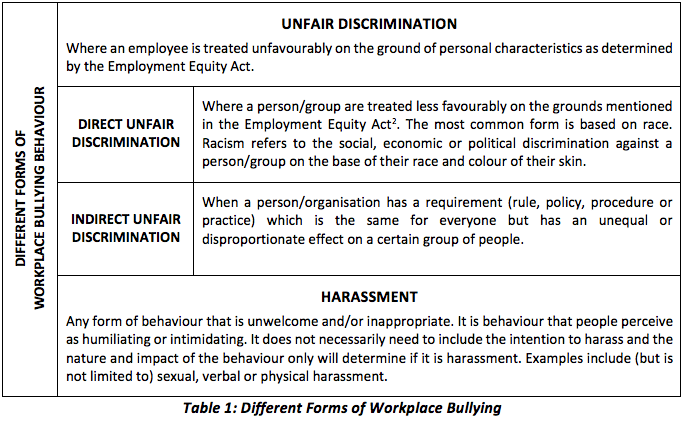 Any form of behaviour that is unwelcome and/or inappropriate. It is behaviour that people perceive as humiliating or intimidating. It does not necessarily need to include the intention to harass and the nature and impact of the behaviour only will determine if it is harassment. Examples include (but is not limited to) sexual, verbal or physical harassment.

Even though the government has implemented progressive legislation to promote equality, fairness, safety and wellbeing of all South Africans, the umbrella term “bullying” is not yet included in labour legislation. Recent cases in the CCMA, Labour Court, Labour Appeal Court, Equality Court and Constitutional Court, however highlighted the “zero tolerance” approach for bully behaviour such as hate speech and racism.

Many employers however still turn a blind eye to bullying. The biggest problem with bullying is thus that employers often do very little about it – their mindset being “if we don’t acknowledge the problem, it might go away”. It is important to acknowledge that bullying can happen at two levels, namely vertically (between employer/management and employee) and horizontally (between employees). Most commentators tend to look at bullying vertically only. It is however of equal importance to ensure the necessary protection of employees on the horizontal level. Research by the Workplace Bullying Institute showed that the outcomes of seeking HR assistance (regarding bullying complaints) are extremely unsuccessful, where HR assisted in reaching a fair and just resolution in only 2% of those complaints.

This article aims to give practical guidance on how to approach workplace bullying through an understanding of recent news and case studies and their implications and suggestions on appropriate strategies, policies and procedures to identify and eliminate bullying in the workplace.

A number of ground-breaking cases were reported in the news recently and has led to much public discourse. It might indicate that South Africa still has a long road ahead eradicating stereotypes, prejudice and biases according to unfair grounds such as race and gender. Roger Southall, Professor of Sociology at the University of Witwatersrand, writing in “The Conversation” suggested that it is wrong to think that legislation cannot change minds. Even though it often takes very long, laws do more than only reflect social norms: they also mould them.

A recent example is the sentencing of Vicki Momberg (former real estate agent) to three-year jail time (one year suspended) for the vicious racial abuse of black traffic officers and police emergency call centre operators attempting to help her after an accident. This makes Momberg the first person in the country to be jailed for this type of Crimen Injuria offence. The significance of this judgement (April 2018) is that racism is not only inappropriate, but also criminal. According to Penelope Andrews, Dean of Law at the University of Cape Town, it sends a symbolic message that racism will not be tolerated and that racial slurs such as the k-word used to humiliate or intimidate will be punished severely.

One thinks of Julius Malema’s Hate Speech case in September 2011 where the Equality Court ruled that the words “Dubula I’bhunu” or “Shoot/Kill the boer” might have been a legitimate struggle song in the past, but in the way Malema sang the chant and the way they have been portrayed through the media it has been transformed to hate speech. He was found guilty on the charge of hate speech and the words “Dubula I’bhunu” was called discriminatory and harmful to the Afrikaner community. It was found that there was no justification for singing them. Jacob Rooi, writing for Rapport (June 2018) also reported that the Parliament is currently drafting a bill to punish hate speech with jailtime of up to three years for a first offence and up to five years for a repeated offence.

A similar case recently made his way to the Constitutional Court (still awaiting judgement, June 2018) where nine employees were fired from work (Duncanmec – manufacturing sector) for singing a struggle song with racial connotations (“climb on the top of the rooftop and shout that my mother is rejoicing when we hit the boers”) during a strike. Paul Hoffman, director of Accountability Now (Public Interest Litigation) had the following to say about the case:

“While other cases involving struggle songs had come before the courts, this was the first in the context of labour. What distinguishes this case is that the relationship between worker and employer ought to be based on co-operation, mutual respect and the willingness to work together towards a common goal. This is difficult to do if employers feel that the lyrics have upset the ongoing relationship of trust.”

The Constitutional Court judged in May 2018 that the term “Black man” used by Bester (employee of Rustenburg Platinum mines) to refer to another employee, are “racially loaded” and deemed Bester’s dismissal as fair. The Constitutional Court argued that the words should be interpreted in South Africa’s Apartheid history and racially charged present. The judgement has the implication that racism will not be tolerated in the workplace and that it can harm a company’s reputation and business interest.

Given the above-mentioned examples, it is of crucial importance that employers (and employees) should ensure the elimination of racism and all other types of bullying in the workplace. The starting point would be a personnel policy dealing with workplace bully behaviour. At Joubert & Associates we advise and assist our clients to develop policies with the following objectives:

It is important that managers discuss the organisation’s policies and point of view on bully behaviour during employee induction and training events. All employees should be sensitised with regards to diversity and the handling of conflict in the workplace. The channels for the reporting of issues and counselling (when needed) as stipulated in the policy should be available and readily accessible. Employers should act sternly and immediately when an employee commits such offenses rather than sweeping it under the rug.

Bully behaviour has a detrimental effect on employee engagement and productivity, not even mentioning the obvious damage it can have on your organisation’s reputation. Get your policies and strategies in place, before it is too late!

“Change the structure of your life” It could prove rather useful to change some old habits or ways of doing... read more

Remuneration is an important aspect of the employee-employer relationship.  It is based on the exchange-relationship between employees and employers,... read more